The number 1 question i get asked is How do i master my opener pitch. If you are looking for the answer, i got it, however if your looking for a one word answer please leave the page because it doesn’t exist. In order to master your opener pitch you first need to understand what the goal is of your opener. Many beginner sales representatives start selling door to door because they want to make money. I began knocking on doors because i too wanted to make a lot of money in a short period of time. With the alarm industry paying a lot of money, guys and gals making six figures in 4 months, whats there not to like about knocking on doors. Now the latest trend seems to be solar, due to the fact that it is a higher payout, less collection upfront and a new thing to …

END_OF_DOCUMENT_TOKEN_TO_BE_REPLACED

Comments Off on Congratulations ! ! ! 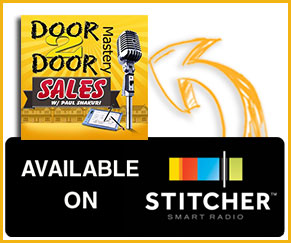